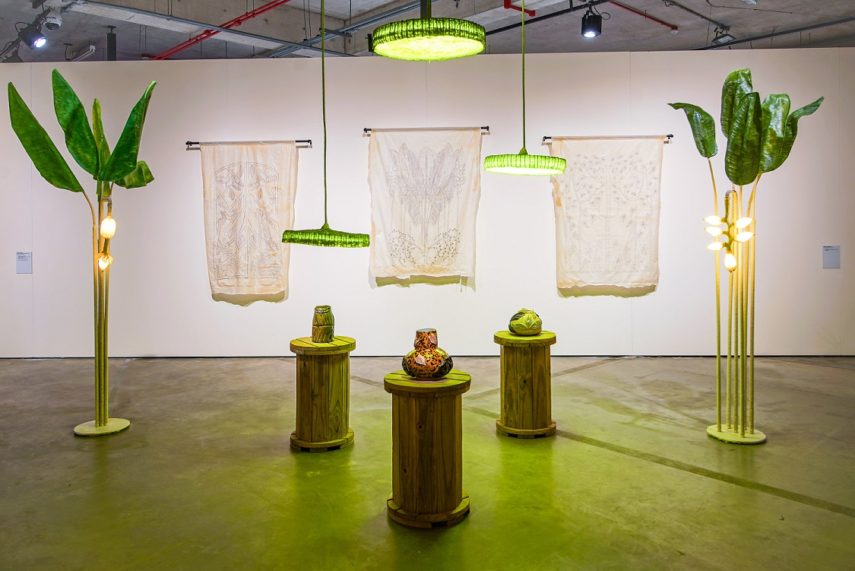 Noara Quintana – Triennal Frestas “The river is a serpent” – Septembre 2021

This work focuses on the so-called ‘Paris of the Tropics’: the name given to the Amazonian Brazilian cities of Belém and Manaus in the late nineteenth century. Made famous by their ‘Belle Époque’ architecture and spirit of modernity, these cities boasted an advanced urban infrastructure made possible by the profits of the booming rubber economy.
Working within this context, the installation Belle Époque of the tropics proposes a re-reading of the Brazilian Belle Époque. While Manaus and Belém were constructed according to an imported aesthetic from France, the wealth that made such extravagance possible was being exported to the real Paris: the European botanical motifs of Art Nouveau were celebrated, while Amazonian botany was disregarded and forgotten, instrumentalized as a source of profit. In this manner, the work seeks to invert the aesthetic relationship between botanical motifs and French art nouveau architecture, inscribing industrial materials like rubber with motifs derived from the botany of the Amazon.
In recognizing how the Paris of the tropics was built on an indigenous knowledge system but imprinted with a European aesthetic, the works calls attention to the connections between European industrialization, the extraction of rubber from Brazil and the lasting stigmas associated with the colonial process.